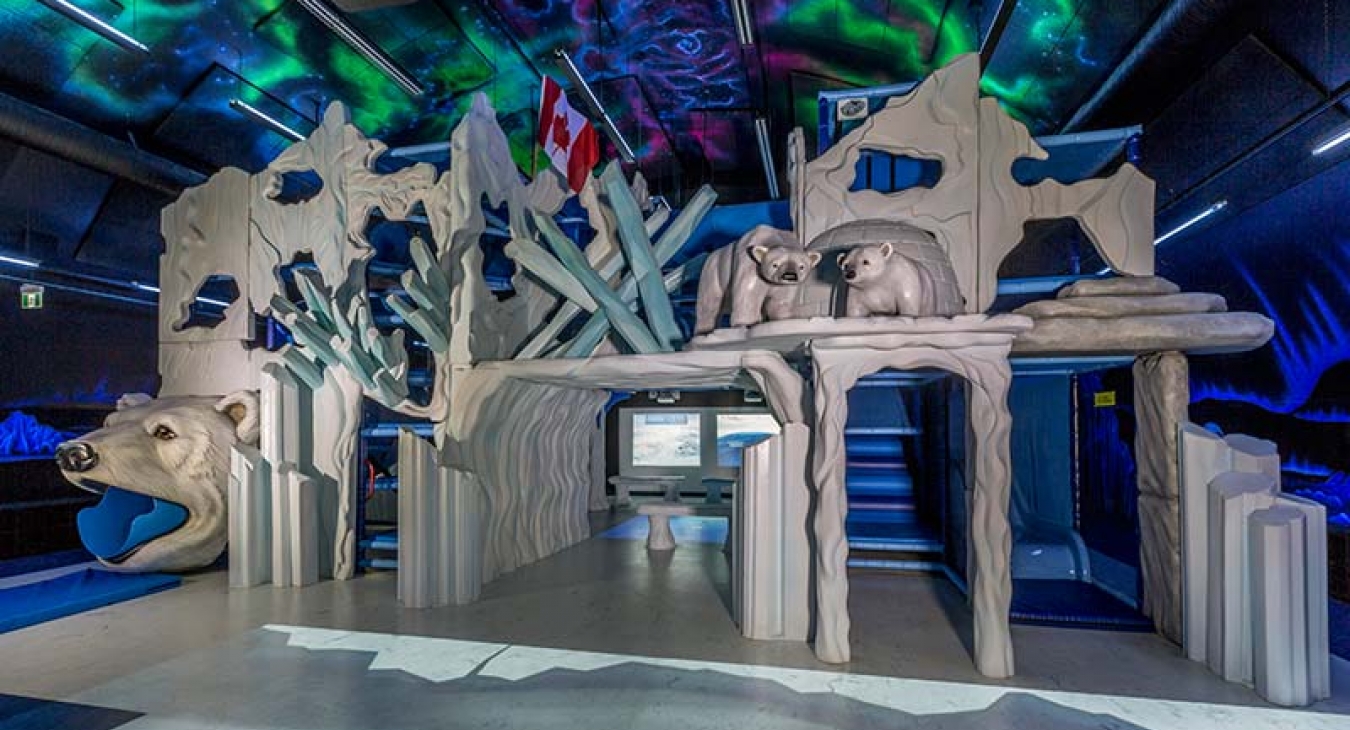 The longing to play is a natural desire in all children. Play is fueled by curiosity, and creative playgrounds spark spontaneous play for kids and provide wonderful opportunities for children to interact and actively learn. It is through the option of diverse types of playgrounds that various types of play are promoted which are vital for a child’s cognitive, emotional, physical, and social development. Indoor playgrounds in particular have become a growing asset in play today as they offer a safe way for children to freely move and explore, rain or shine.

Children love to use their imagination. Indoor playground companies design playgrounds to not only provide a basic standard play area but to also challenge a child’s mind through the creation of themed playgrounds. Playgrounds are much more than just playing fields with the obvious benefit of physical activity – it is through the appearance, structure, and diverse themes of playgrounds that make imaginations soar.

Choosing to design a themed playground can benefit playground owners much more than the choice of a traditional play space. Theming can help portray a mood to the play area and its surroundings, and the ultimate uniqueness of a playground can attract children and parents alike. From castles, animals, jungles, to pirate ships – bringing a playground to life through a world of make believe can boost the popularity of the playground as well as expand a child’s imaginative play. Much like the mood of a café is portrayed through its aesthetics, music, furniture, and overall impression to its customers, a themed playground can similarly embody its own unique ambience and artistic imprint that will keep children coming back for more play time.

Themed playgrounds promote role playing where a child can imagine different roles, such as a nurse, doctor, pirate, or astronaut, depending on the theme. Role playing allows children to imitate what they have observed from past experiences in real life settings and imitate the movements and dialog they observed in pretend play. This form of imaginative play provides cognitive and social benefits as it develops a child’s verbal skills, creativity, and social interactions.

When designing a themed playground, multiple choices of interactive play can be incorporated. Imaginative climbing structures, such as rock walls that could be designed to look like buildings, and background designs that grasp the concept of a theme, such as national history, plants, space, or animals, add to the overall experience. Creative design helps incorporate an educational and variety-filled play adventure for both the children and parents.

Located in Winnipeg, Manitoba is a polar bear playground residing at the Assiniboine Zoo that is a great example of interactive themed play. This playground is a fully immersive play area designed as an arctic wonderland of active participation intended to educate and entertain visitors about the great polar bears of Churchill. Features include sliding and climbing as well as an ice cave with hidden messages, a moving ice-mass floor that responds to footsteps, a responsive Aurora Borealis wall where children can conduct the northern lights, and a wall-sized icicle xylophone!

The design of themed playgrounds goes beyond the requirement to be structurally flawless in safety and appearance; the design also appeals to the creative mind of a child. More than just an area to climb and slide, the overall mood built into the theme spurs children to engage with the imaginative activities and encourages them to want to come back for more.

Theming a playground is not a simple task, or at least it shouldn’t be. A theme dramatizes a feeling; it is added to invoke emotions, a sensation, a memory, or a mystery. It should inspire and create awe. The children should feel completely enveloped in the theme of a playground when done well. “Thinking outside of the box” by play designers produces imaginative themes that will accomplish the goal of immersing children in the experience of the play area.

Since indoor themed playgrounds are custom designed, often the original design request from the playground owner may be vague. A suggestion of a theme of using only boxes would require the designer to literally “think outside of the box” and add an artistic twist to the design. Current trends call for modern and artistic approaches. When constructing a theme, it must always be eye catching, brilliant in color, and ultimately more than the playground owner imagined, giving that “awe” factor.

Branding as a Theme

In many cases a playground owner’s brand is clearly identified by a theme, but is a playground a theme in its own right? A particular play facility that stands out from the rest is Tommy K Play in Calgary, Alberta. Tommy K Play is a company that believes in both parent and child stimulation and satisfaction. While the child needs that spontaneous free play time, it is necessary for a parent to also enjoy the environment and setting.

Due to its cold harsh seasons outside, Calgary has many indoor play centers. The owner of TKP wanted to create a facility that was known for cleanliness, adult comforts, and an extreme level of fun for kids. Rather than becoming the next “jungle” or “space mission,” TKP created a brand that stands for quality and fun equipment while also screaming clean and safe. They chose color schemes that appealed to adults with a jet-black playground and soothing wall colors that left the entire structure looking clean and sophisticated. The choice to accommodate both a mature and younger audience is what made this particular play facility stand out.

The brand itself is the mixture of color coordination, flawless structure, and versatility in mood – appealing to all people who visit the facility. Through smart and attentive choices when creating their facility, they have generated strict brand identification. Visitors know they are entering a Tommy K Play facility because of their unique mixture of set up, service, and ambience. This play facility built a playground without intending to create a theme. The brand and method it delivered turned out to be so powerful that it essentially did create a theme, their own.

Is Theming a MUST Do?

Theming is important depending on the playground owner’s goals. Not all facilities are required to have a jungle look or a cubism feel. Some really don’t even need a powerful brand at all. Everything is demographically based when it comes to the must do’s or don’ts in theming. For example, in certain areas with a smaller demographic than others with less competition, the playground can survive strictly on demand and service. However, in larger markets where it is more competitive, it must be instinctively different and exceptional to survive. The decision to theme or not is based on the playground owner’s business plan. The cost of theming a playground can typically add anywhere from 15% to 50% depending on the level of detail and volume.

Indoor themed playgrounds are custom designed and manufactured. When branding is involved, they must be unique and identifiable. The cost of custom themed play pieces does not need to deter their choice as an option. Budgetary theming is available and a playground design company will have a multitude of options for the buyer.

In short, countless communities are eagerly looking for various ways to make their play areas stand out from the rest. In order to draw individuals of all ages and abilities to such facilities, they must embody an environment that can inspire imaginative play and provoke curious children to explore the many features of a well-designed play area.

Please visit the author of

Please visit the author of this articles website for your inquiries.

Themed play is wonderful but in the US the equipment should meet the standards for traditional play equipment or contained play equipment. Manufacturers need to be aware of these responsibilities as they are placing the owners who rely on their expertise in jeopardy. Placing a mat at the exit of a slide as shown in one of the photos is not meeting standards.