It Takes A Community To Put Play Everywhere 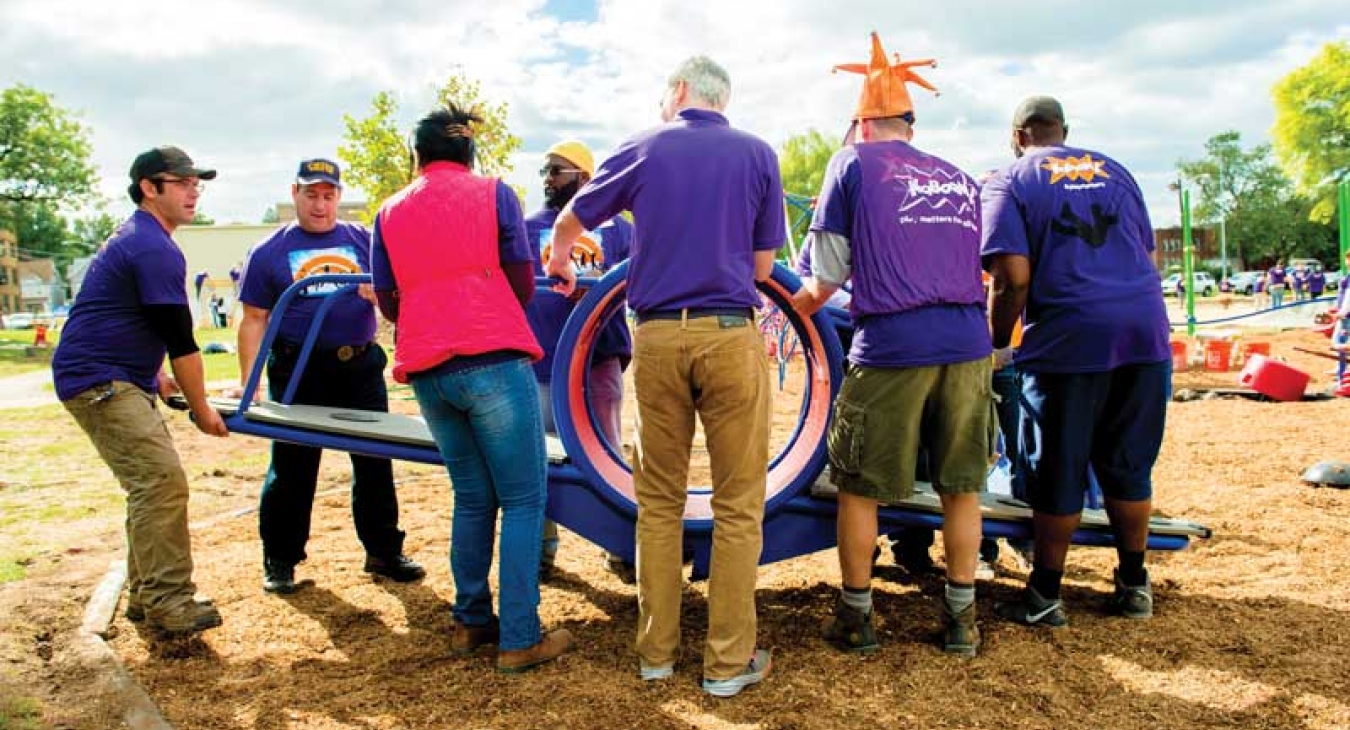 The importance of play in children’s mental and physical development is well documented. Yet, the number of children fully engaging in outdoor unstructured play appears to be dwindling. Currently, only one in five children live within walking distance of a park or playground, resulting in this generation spending less time playing outside than any previous generation. There are multiple reasons for this, including heavy sports schedules and an uptick in screen time, but the fact is that many communities lack access to appropriate play spaces, leaving kids with nowhere safe to play. This play deficit is having profound consequences for children physically, socially, and cognitively as children need a place to play every day in order to be active and healthy.

But there are individuals and organizations working to implement a change. Parents and communities across the country are coming together to build playgrounds in schools, parks, and residential areas. These play spaces truly bring out the best in people as neighbors collaborate to promote local children’s health and creativity.

KaBOOM! has developed successful partnerships to do just that. KaBOOM!, believes all kids deserve great places to play. With its partners, KaBOOM! is advancing toward achieving its vision of working to catalyze and create great places to play, empowering advocates to promote and protect play, and elevating public discourse around the importance of play.

KaBOOM! has collaborated with partners to build, open, or improve many playgrounds, engaging more than one million volunteers and serving 8.1 million children since its first playground build in 1995. In 1997, Playworld became a longstanding partner in play for KaBOOM!. Throughout the partnership, Playworld has supplied equipment for over 2,500 of the 16,000+ KaBOOM! playground projects, helping to unite and strengthen communities through the power of play.

On October 24, 2015, Make a Difference Day, KaBOOM!, Playworld, several other partners, and members of the local community helped build three new playgrounds in Baltimore as part of the Play More B’More initiative. Play More B’More is a unique public-private partnership to benefit underserved youth in the city. Hundreds of kids and teenagers served as interns and volunteers to create a kid-friendly city, filled with opportunities to play. Play More B’More creates unique play solutions for kids and provides the youth with a sense of purpose and a pathway to opportunity as they gain professional experience and skills while giving back to the community. The new playgrounds are expected to positively impact 4,000 children a year by providing them access to great play spaces. Through the Play More B’More initiative, Baltimore is taking action to make it as easy as possible for all kids, particularly kids growing up in poverty, to get the play they need to thrive. It is a powerful example for other cities to follow.

Another important project for KaBOOM! took place after the devastating effects of Hurricane Katrina. Ten years ago, the Gulf Coast region was united by tragedy and despair when Hurricanes Katrina and Rita struck less than a month apart. In the aftermath, KaBOOM!, with the help of partners, impacted 44 cities and leveraged $27.1 million dollars to build 194 play spaces post-Katrina. To this day, KaBOOM! [kaboom.org] continues to encourage community development through playground builds in the gulf and support the kids who need it most.