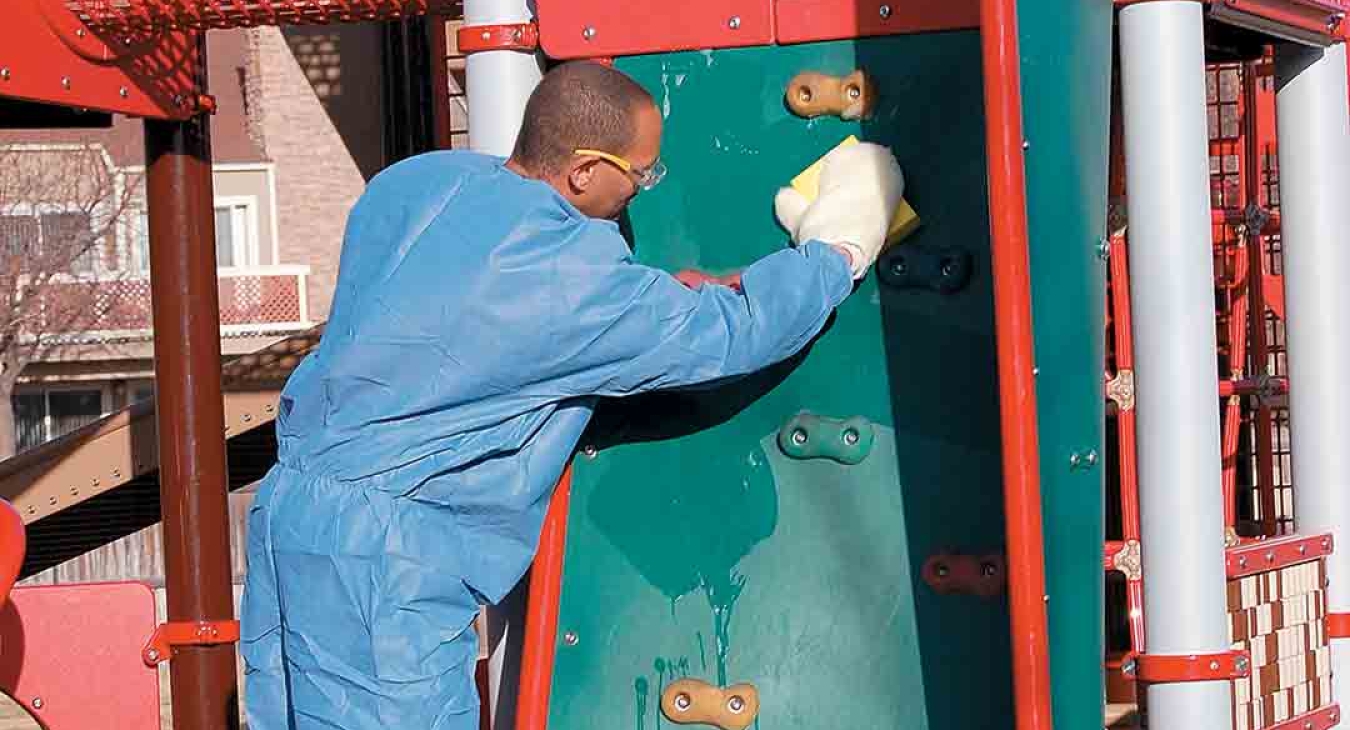 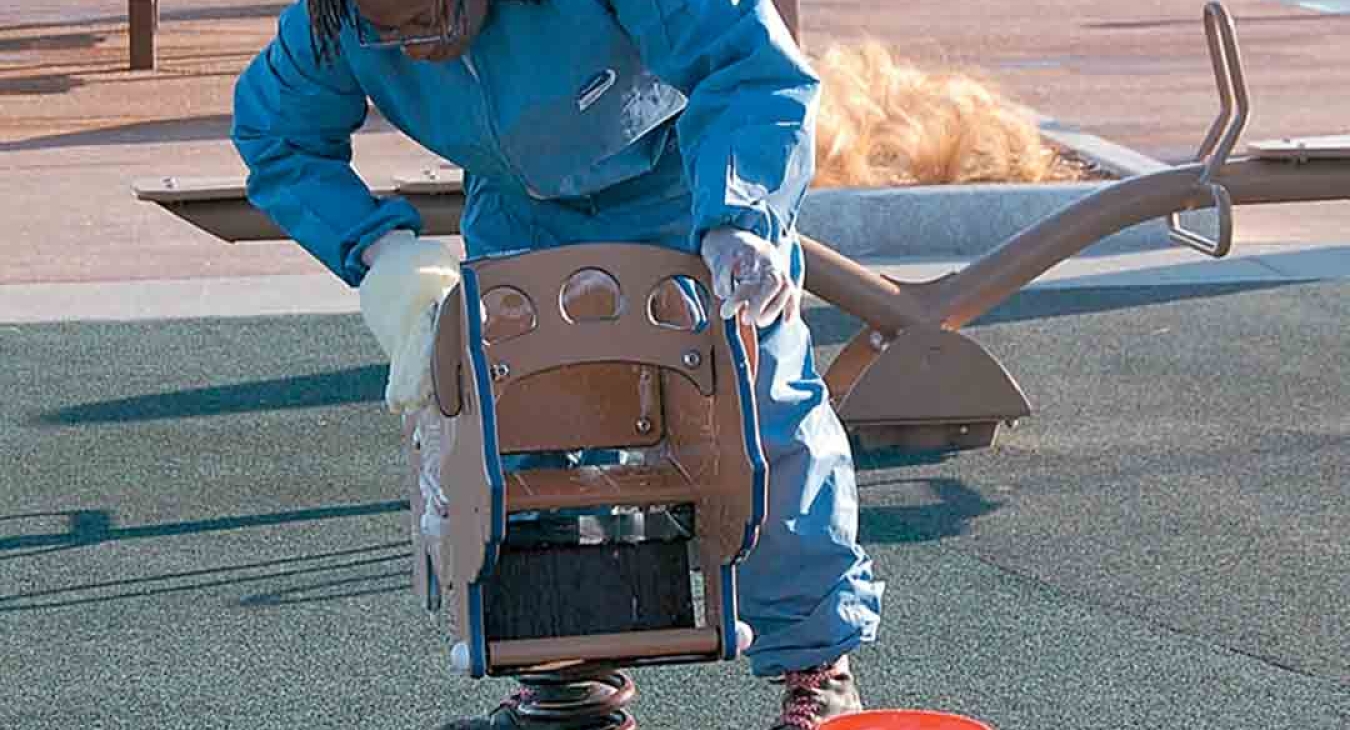 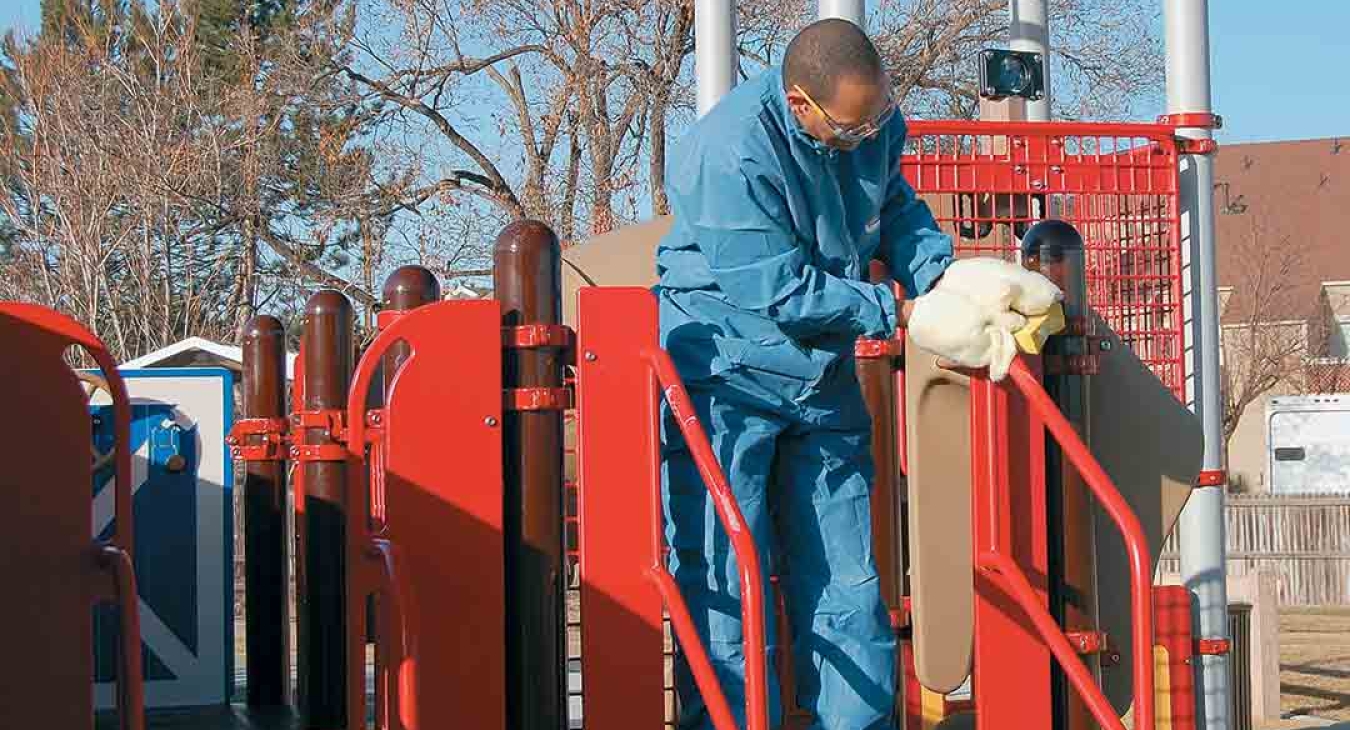 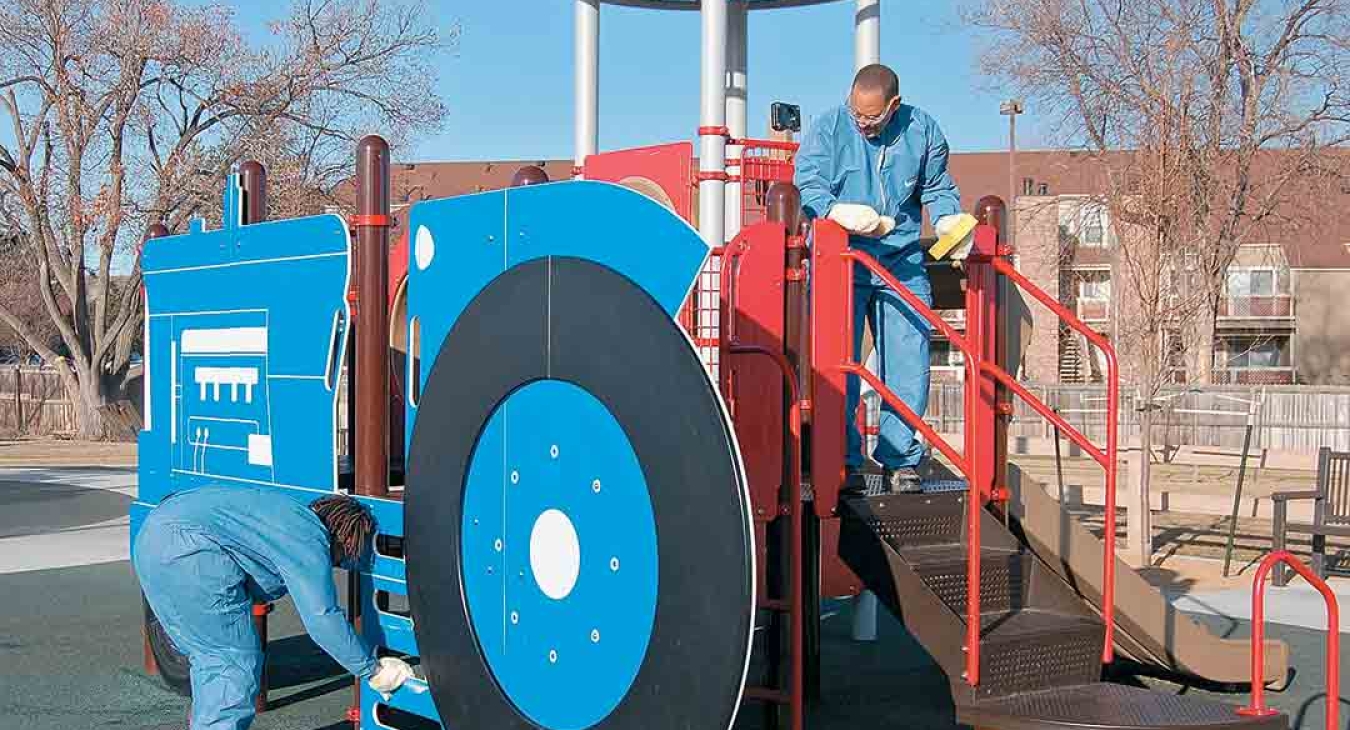 Staying ahead of the grime

The Aurora Parks and Open Space Department knows what is lurking on the playground long after the children have gone home, and it’s not pretty. Active hands and feet that happily crawl over popular equipment leave behind a plethora of undesirable germs, body fluids, and good old-fashioned grit and grime. The Department developed a playground sanitation program to combat the filth and further its mission, which is to be “stewards of outdoor places essential for people and nature to thrive in the community.”

“The creation of this program demonstrates that staff is paying attention to the needs of our citizens.”

Facilities like Del Mar Park, a popular 40-acre community park with a renovated playground, receive incredible usage and are extremely popular with local youth. Parks O&M staff visits sites like Del Mar Park as part of their regular maintenance program, which includes inspection, repair, and graffiti removal as needed for restrooms, picnic shelters, and playground equipment. The PSP program was developed as an additional tier of service to keep playground facilities on par with existing service levels of other components of a park site. As longtime parks supervisor Marsha Watts commented, “We were already there, saw the need, and had to clean the equipment.”

The PSP utilizes a Hotsy high-pressure washer, wash mitts, and a solution of non-hazardous organic-based cleanser. The program is conducted in the early morning hours before crowds arrive and while the playground is vacant. Staff begins by mixing the cleanser with tepid water and donning wash mitts to swab the equipment with the organic-based cleansing solution.

Two staff members wipe down surface areas, paying special attention to hand-holds, slide surfaces, and seating equipment, while simultaneously visually inspecting other areas of the equipment. As this crew finishes up, a third staff member uses the Hotsy, which can reach temperatures of up to 200 degrees, to pressure spray the entire piece of equipment, as well as the playground safety surface itself. As a safety precaution, the site is never left unattended. However, once the Hotsy operator begins to spray down the equipment, the wash crew is able to move on to clean the next facility.

Surfacing varies at each playground site, from synthetic turf to poured-in-place rubber to engineered wood chips. The staff has not encountered problems with the use of the high-pressure washer on these surfacing materials. The diluted cleaning fluids easily dissipate on surfaces, especially given our low humidity in Colorado. Staff responsible for wiping down play equipment wears gloves, eyewear, and appropriate clothing to minimize any splashback or grime from getting on them. The Hotsy operator is trained in the use of the machine to avoid potential splashback and wears protective gloves and eyewear as well.

The use of an organic-based cleanser is paramount to the success of the PSP. While various cleansers are on the market, staff typically prefers to use non-toxic and biodegradable all-purpose cleaning products. Organic cleansers reduce the risk of negative reactions in children, as well as the staff who may potentially come into contact with the solution. The cleanser can also be easily absorbed into the ground without harming soils when it is used over various types of safety surfacing. Neither the cleanser nor the use of the Hotsy has caused any damage to the powder coating on playground equipment. Colors remain vibrant with no chalking or other degradation.

A crew of three trained workers can typically complete 10-15 sites a day, depending on the size of the park and including drive time to locations. Cleaning times of playgrounds vary given the size and number of playground units. The Aurora Parks and Open Space Department has a current total of 78 playground units at 65 sites throughout the city. Each of the 78 units is cleaned at least once a month or as needed. During the Department’s peak season (April – October), or before and after holidays, high-volume playgrounds are cleaned twice per week or more. Equipment is inspected daily at popular sites to determine repair and sanitation needs. Again, the Playground Sanitation Program is a supplement to regular park maintenance. Through the department’s new hire orientation program, the staff is encouraged to take off any “blinders” when visiting sites and avoid the “it’s-not-my-job-mentality.” All staff in the Parks Operations and Management Division, from the manager to seasonal staff, is held accountable for park facility maintenance.

The cost of the program includes an initial investment of $8,500 for the Hotsy, which is permanently mounted on a ¾ ton truck and with frequent use must be replaced every 4 – 5 years. Other costs include staff wages for one full-time maintenance worker and two seasonal workers, as well as materials and supplies.

The citizens of Aurora have come to expect high-quality facilities from the Parks and Open Space Department. Parents and caregivers that have encountered staff swabbing a playground deck are always pleasantly surprised and often grateful for the extra attention to detail provided by this service. As Jack Cooper, Director of Aurora Parks and Open Space, notes, “The creation of this program demonstrates that staff is paying attention to the needs of our citizens.” The staff initiative to develop and sustain such a detailed program illustrates that even some of our smallest customers are a really big priority.