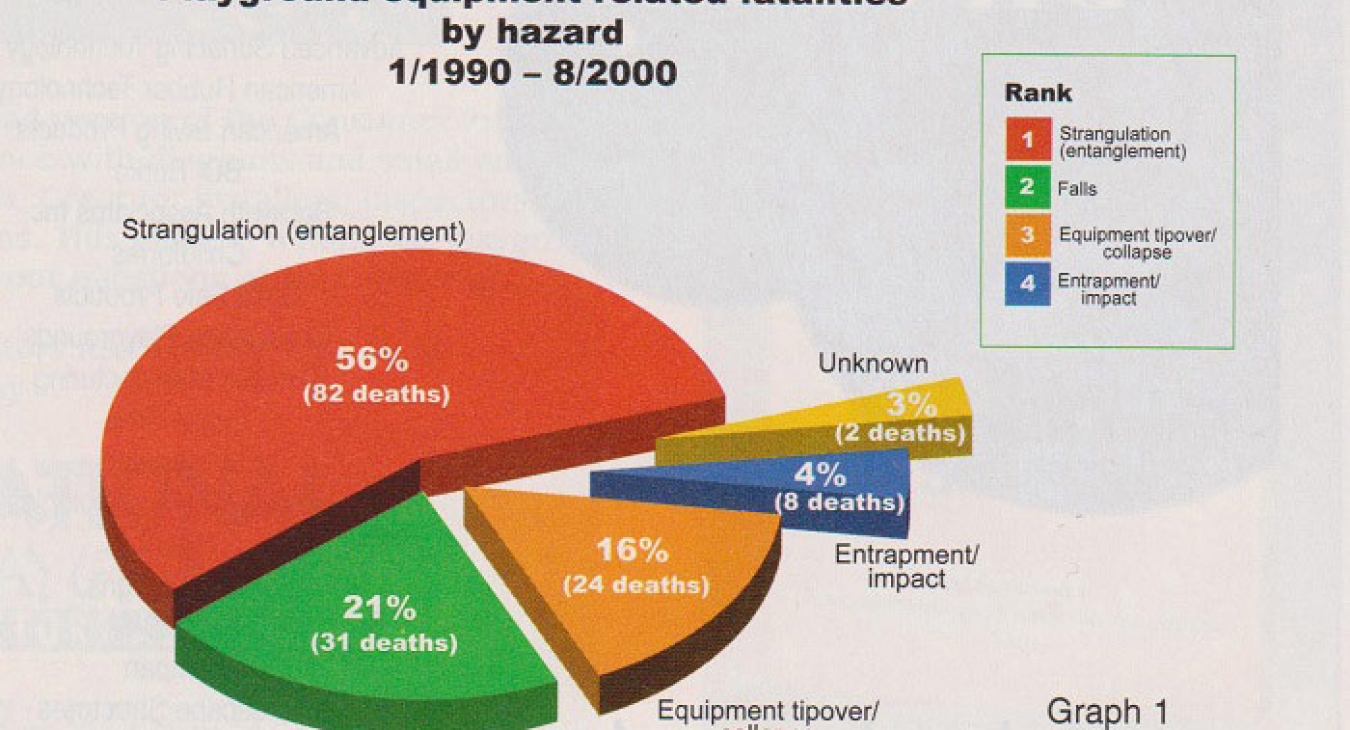 Don't Let Kids Fall For It

The CPSC Special Study of Injuries and Deaths Associated with Children’s Playground Equipment, released in April 2001, presented some grim findings on public playgrounds. These findings are briefly summarized here:

Most kids were injured on public playgrounds because of a fall.

This represents an increase of fall-related injuries on public playgrounds of some five percent from an earlier 1988 study. It is important to note that the CPSC states this increase may actually be a reflection of a reduction of other hazards such as impact with equipment or hardware, pinch points, and sharp edges.

One of every five reported playground fatalities were caused by a fall.

Of the top four causes of playground fatalities, fall Is ranked second. Of the 147 reported playground-related deaths noted in this study since 1990, 21 percent were attributed to falls (n=31). As could be expected, three-quarters of these involved a head injury. In recent years the CPSC obtained death certificates reporting falls from only one or two states, thus the Commission believes deaths due to falling Is are under-reported in its data. This finding is important because strangulation, the leading cause of reported playground deaths, was most commonly attributed to hanging agents brought onto the playground by children or others. Specifically mentioned were ropes, shoestrings, jump ropes, cords, sashes, leashes, clothing drawstrings, and bicycle helmets.

Thus falls, as a cause of playground fatalities, appear to offer more opportunity for improvement by playground owners and surfacing manufacturers.

Kids who were injured fell most frequently from climbers and swings.

Loss of grip usually caused most kids who were injured to fall.

Kids who were injured typically fell down less than six feet and often fell less than four feet.

What about playground surfacing?

In this study, only 16 percent of the injuries on public playgrounds occurred on non-protective surfacings such as dirt, grass, asphalt or concrete. These materials were, however, reported in those cases involving serious head injuries.

Most injuries (i.e., 79 percent) occurred on materials that have been labeled as "protective surfacing." Wood chips or bark mulch were identified as present for 30 percent of public playground injuries; sand was identified in 23 percent; mats or poured resilient surfaces in 14 percent; gravel [pea stone] in 8 percent; and shredded tires in 4 percent.

Because severe head injuries from falls have the potential for serious long-term consequences or death, ASTM test methods to evaluate the suitability of surfacing materials are based on head injury criteria and CPSC recommendations on surfacing have been based on the results of these tests. CPSC recommends protective surfacing materials must have a critical height equal or greater than the identified fall height of the play equipment installed.

It is interesting to note that, in the 2001 CPSC study, most fall injuries on protective surfacing occurred on either wood chips or bark mulch, the two surfacing materials with the greatest critical heights of the materials tested by the CPSC. What the 2001 CPSC study does not indicate are a) whether the surfacing materials were of sufficient depth at the point of impact; b) whether the victim fell within the fall zone boundary or beyond; and c) what was the frequency distribution of less severe fall injuries on these surface materials other than reported deaths.

The effectiveness of these various safety surfaces in reducing the frequency and severity of fall-related injuries other than head injuries is not known. Fractures of the hand and arm- especially the wrist, lower arm, and elbow-were the most common injuries noted in the 2001 CPSC study.

Approximately 3 percent of all victims of playground-related injuries were admitted to the hospital for further treatment; not just treated and released. All these resulted from falls and almost all involved arm fractures that required surgery to repair.

Until new research on surfacing is released, what should be done?

It is important that agencies establish a playground safety policy that sets a minimum acceptable level of injury to occur on the playground. The National Playground Safety Institute (NPSI) defines a Priority 1 Hazard as one that could cause an injury which would result in death; brain damage; permanent paralysis; loss of vision, speech, or a limb; or destruction of a critical organ. This, of course, should be the minimum unacceptable consequence of any playground accident. But if an agency wishes to establish a more stringent standard- such as declaring fractures requiring operation room surgery or overnight hospitalization unacceptable-it must raise the bar for the minimum provision of safety surfacing accordingly.

In the meantime, there are several effective installation and maintenance practices for loose-fill playground surfacing:

When installing a loose-fill use zone, provide adequate surface runoff diversion swales or interceptor catch inlets outside the containment border for adjacent hills sloping down into the playground. This will prevent heavy rains from washing out the loose fill materials.

Likewise, provide adequate percolation drainage under the loose-fill surfacing so that rain falling onto the surfacing can quickly seep out and reach down through the surfacing, and reduce flood or wetness problems.

Install the proper depth of loose-fill material when compressed, based on the CPSC-determined critical height of the loose-fill material and the highest fall height of all the equipment within the contiguous use zones contained inside one surfacing containment border. Check the most recent edition of the ASTM standard for public playground equipment to determine where to measure the fall height for each type of equipment.

Mark the required minimum loose-fill surfacing depth in several locations-on composite equipment support posts, on swing frame posts, on ladders, on the bottom slide bed support, on each climbing component- as close as possible to the place where children use the equipment the most and where they get on and off the equipment.

Make it a standard routine maintenance procedure to keep sufficient loose-fill surfacing materials in place to come up to these marked levels. This should be done by adding more material to the surfacing bed, not raking it away from other regions of the use zone.

Do not turn or "fluff" wood chips, mulch or fiber. This may actually reduce the resiliency of an old bed; instead, top off the existing surface with more material on a regular basis.

Periodically loosen compressed sand by turning it with a spade, turning fork or deep-set rototiller (being careful to not run into concrete footers) in addition to adding replacement sand. Adding a couple additional inches of new sand on top of a badly hard-packed existing sand surface may do more harm than good because users may believe the entire depth of the surfacing is as resilient as the top layer.

Make sure there are no extraneous substances mixed in or laying on top of the loose-fill material. One agency installed loose-fill surfacing obtained from a local business that processed used wood crates and pallets into chips, only to discover the metal staples and brads had not been removed. Similarly, all park trash- broken bottles, beverage containers, shards, broken branches, sticks, etc.-must be removed as part of routine maintenance.

Play items such as bicycles, wagons, skateboards, and scooters must be kept out of the playground use zone. Unoccupied wheelchairs must be kept in appropriate parking areas.

It is an accepted fact that kids using play equipment above the ground can possibly fall off. Not all equipment has safety rails or protective barriers to reduce that probability. Classic examples of this include climbing frames, swing structures, and open slide beds, among others. It is recognized that fall prevention provisions are only so effective; injury severity reduction provisions for inevitable falls must also be employed on playgrounds. This means that safety surfacing is necessary.

Today, most agencies in the U.S. use loose-fill surfacing predominately for this purpose. To be effective, it must be selected according to the use, development, environmental, and fiscal requirements of the agency. It must be installed correctly at the proper depth, distance from the play structures, provided with appropriate containment and drainage provisions, and it must be routinely inspected and maintained. Loose-fill safety surfacing will continue to be used on public playgrounds for some time to come. It isn't perfect, but it can be much more effective if we give it proper attention.