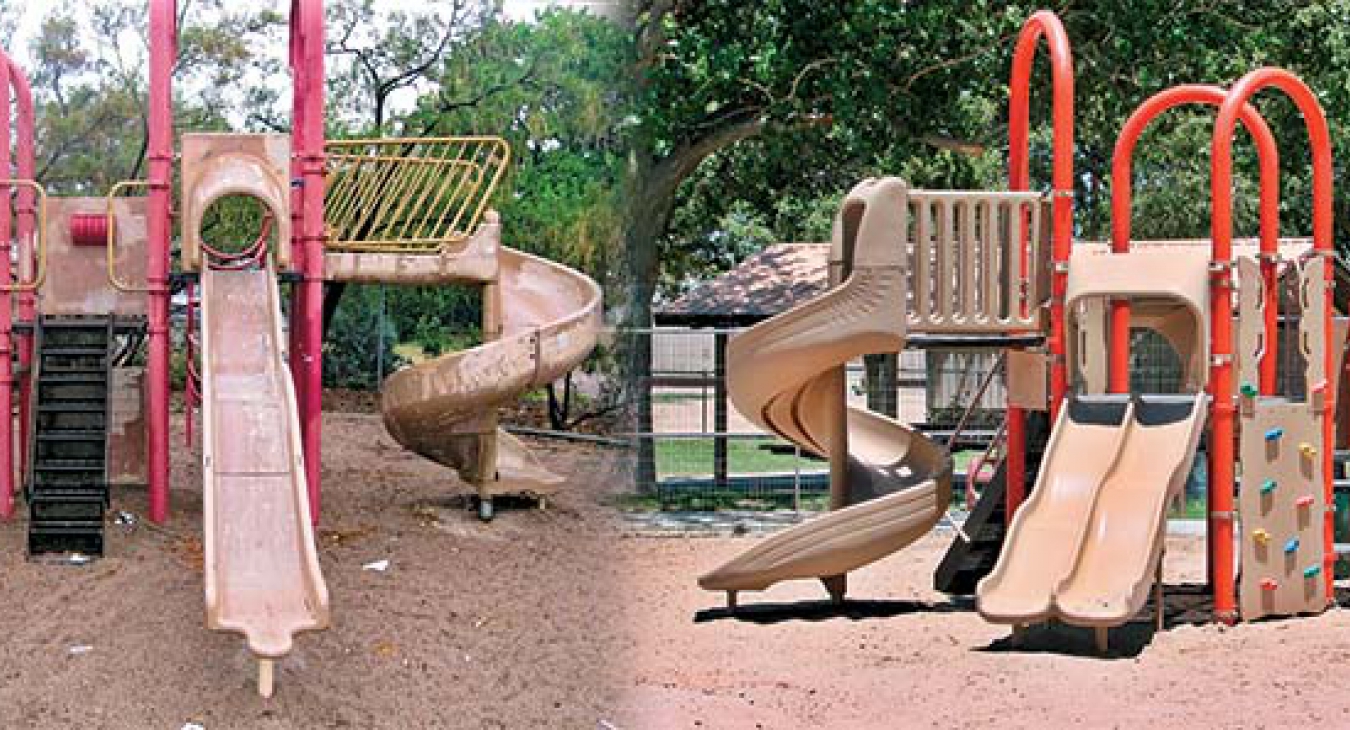 Retrofitting is a great alternative

There are nearly 150 playgrounds located throughout the city of Albuquerque, NM, many with which David Flores, principal project coordinator for the City of Albuquerque parks and recreation department, has been involved.

Flores represents the technical and professional needs of the department. When a specific project receives funding, he executes it from planning and design through construction. Additionally, Flores acts as a liaison between community members and the council, directing their concerns to the appropriate person.

Some concerns from community members include replacing or updating aging playground structures. As he noticed the wear of a few existing playstructures, along with feedback from the community, Flores began looking into updating the structures. That’s when he learned about the ability to retrofit a few of the existing structures rather than replacing entire playgrounds.

This is what the playground at Albuquerque’s Eddie Garcia Park looks like now after getting an upgrade. The retrofitted playground has many of the same play features but they are much more attractive now.

“Our playground consultant knew that we were interested in updating a few of our aging playstructures,” says Flores. “The playstructures were still safe and in relatively good shape, so instead of designing a whole new playground, he suggested retrofitting the existing structures.”

Flores’ playground consultant, Dan Gardiner of ExerPlay, Inc., in Cedar Crest, NM, helped him understand the benefits of a retrofit. First and foremost, there are major cost savings. In addition to the obvious savings of not purchasing an entire playstructure, there were savings in not removing the existing structures as well as eliminating the need for groundwork including surfacing.

The old playground at Alamosa Park in Albuquerque before it was retrofitted.

“We brought the idea of retrofits to the City of Albuquerque because it has nearly 100 of our playgrounds installed throughout the city, many of which are 15 years old or more,” says Gardiner. “In addition to many other communities throughout the United States, the City of Albuquerque is faced with tight budgets. The retrofit option allowed us to update five playgrounds for the price of one new playground.”

This playground is one of five the City of Albuquerque has retrofitted since late 2010. Compare the changes of this playground to what it originally looked like

Even modest changes make a retrofitted playground look brand new. This at a price many budget-squeezed towns and cities find attractive in today’s economic climate.

Another benefit to retrofitting city playgrounds instead of replacing them, explained Flores, is timeframe. “Since the playground is already established and I’m just modifying what is already there, I didn’t have to put the project out for public comment. A retrofit is more of a maintenance project, which is a lot easier overall.”

Sustainability is another aspect to think about when considering retrofitting existing playgrounds. In the case of the City of Albuquerque, the playstructures that it retrofitted were all in good shape.

“Despite being 15 to 20 years old, the condition of the existing playstructures was fine,” says Flores. “By swapping out a few components here and there, we created a whole new play experience. And there wasn’t unnecessary waste here or at Landscape Structures’ manufacturing facility. Retrofits provide a really practical approach for updating your playgrounds with minimal environmental impact.”

Where To Focus First

Since the fall of 2010, Flores and the City of Albuquerque have retrofitted five playstructures. Typically when they begin work on a retrofit project, Flores focuses on the rotationally molded polyethylene components like slides, climbers and roofs.

He explained, “The plastic pieces usually show the most wear. Next, we focus on the play panels and climbing components. We see what’s new in the marketplace and try to incorporate some of the newest pieces in place of the outdated panels and climbers. It’s great when we can swap an old climber for a new spinner. These changes are a big improvement for the kids that are playing and the community isn’t being interrupted by months of construction.”

In addition to swapping old components for new ones, Flores often gets the playstructure repainted onsite. When the whole project is complete, the retrofitted playstructure looks like a brand new playground.

The City of Albuquerque isn’t the only community considering retrofit to extend its playground budget. ExerPlay has worked with other park and recreation departments and schools throughout New Mexico, Arizona and Texas to refresh existing playgrounds and Landscape Structures customers across the country have worked with their consultants on retrofit projects.

“I would definitely encourage playground planners to look into the possibility of retrofits,” says Flores. “Work closely with your playground consultant to evaluate the existing playstructure. He or she will help you determine what should be replaced for safety reasons and what updates you can make that will help it meet current standards. Retrofits provide an opportunity to revitalize existing playgrounds, and cut the process timeline significantly.

“The community members notice a difference in the playgrounds. They think it’s a brand new structure, and for the most part, it is. It’s similar, but better.”