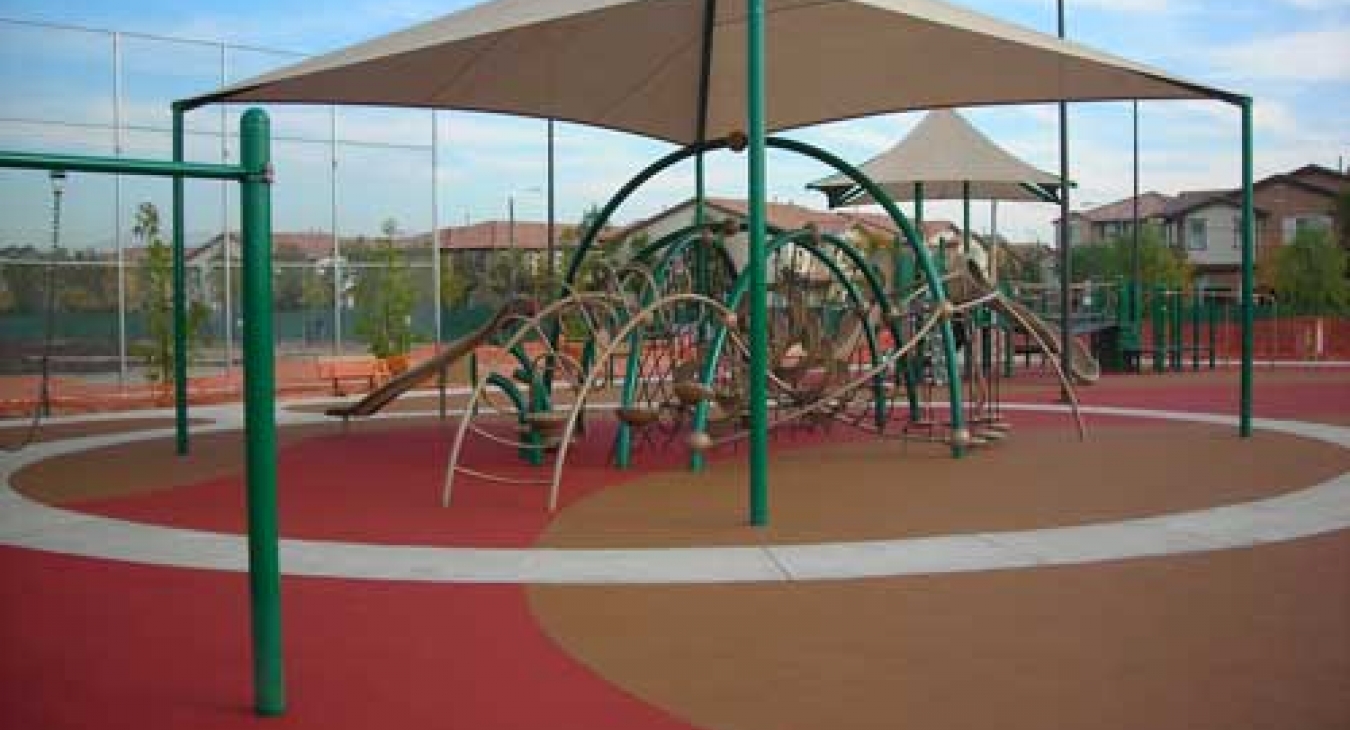 Then and Now: A Report from ASTM

When I was a child, the memorable parts of my playground were the tall metal slide, the bank of metal swings, and the metal climbing structure. These were set on a surface of asphalt. The ball field next to the play area was also asphalt. I bear the scar of falling to that surface to this day with a repaired chipped front tooth. Today that equipment and surface would be universally condemned as unsafe.

Dr. Joe Frost, in his article titled “History of Playground Safety in America” (Children’s Environments Quarterly, Vol.2 No.4 (winter), 1988), traces the progress in playground design from the early 1930s to the 1980s. According to this report, efforts by the National Recreation Association and other recreation leaders in the 1930s resulted in a list of the desirable qualities of a play surface: “resilience, good drainage, dust-free, durability, nonabrasiveness, cleanliness, firmness, smoothness, utility, reasonable cost, and good appearance.” My asphalt playground was a result of that work that recognized that asphalt was more resilient than concrete and easier to maintain than other surfaces.

In 1974, the U.S. Consumer Product Safety Commission (CPSC) granted a petition from Elayne Butwinick that requested a standard for playground equipment. The National Recreation and Park Association (NRPA) convened a committee and submitted a draft standard to CPSC in May 1976. The draft had a section on surfacing with impact attenuation data on 13 materials. The tests, conducted by the Franklin Institute Research Laboratories in Philadelphia, followed the test procedures of a standard from the American Society for Testing and Materials, now called ASTM International (ASTM), for measuring impact attenuation of playing surfaces, ASTM F355-72. An “average” deceleration was measured for drops of a missile from various heights onto each surface. Their recommended average for a safe surface was 50 g's.

CPSC recommended additional research on surfacing, and in 1977 issued a contract to the National Bureau of Standards (NBS) to develop a method to measure impact attenuation. The NBS work resulted in a recommendation to use an instrumented ANSI “C-size” metal headform dropped on a surface with the resulting deceleration measured. NBS also recommended that “peak” acceleration (G-max) rather than “average” deceleration be used as the criterion. The recommended criterion for an acceptable surface was a G-max of no more than 200.

CPSC eventually terminated the effort to develop a mandatory playground standard and instead issued reports based on the NBS work as a two volume handbook in 1981. Volume II contained the technical recommendations for playground equipment and surfacing under and around that equipment. Surfacing was to be resilient and shock-absorbing, and CPSC recommended the test and criterion from the NBS work. The NBS test used the basic procedures specified in ASTM F355-72.

In 1986, ASTM established a subcommittee to specifically address impact attenuation of playground surfacing in a voluntary standard. At the same time, CPSC continued its work on surfacing impact. The CPSC published a Technical Information Guide in 1990 that showed critical fall heights of seven materials. In this guide, the specified impact criterion included a G-max no greater than 200 and another measure, the Head Injury Criteria (HIC) not to exceed 1000. HIC, was a measure used by the National Highway Traffic Safety Administration (NHTSA). It was believed to better predict the threshold for serious head injury, because it took into account the duration of the impact. HIC is calculated from the G-time deceleration data.

The ASTM subcommittee, ASTM F08.63, after a series of tests on various playground surfaces, published its first standard in 1991. The standard, ASTM F1292-91, adopted the NBS test using the ANSI C headform and a G-max criterion of 200. In 1993, the ASTM subcommittee revised the standard to include the CPSC recommended HIC criterion.

The standards are updated regularly with a requirement that a standard be revised or reaffirmed or dropped every five years. ASTM F1292 is the core standard of the subcommittee and has been updated over the years to include a field test, an instrumented free-fall test device, and the use of a hemispherical headform that replaces the ANSI C headform.

The subcommittee on playground surfacing standards, ASTM F08.63, meets twice a year at the ASTM F08 Main Committee meeting. Our current efforts are aimed at revising the F1292 standard back into its basic form as a laboratory test to certify materials and to move the field test procedures to a separate, stand-alone standard. We also have a current ballot for a new standard for Rubber Poured-In-Place Playground Safety Surfacing Under and Around Playground Equipment. A new effort is underway to develop the requirements for indoor surfacing.

The subcommittee currently consists of a 164 members representing producers and general interest/consumers. The mix of people often leads to some contentious efforts to develop or change standards. Recently, the subcommittee was stymied in its efforts to ballot a change in the HIC requirement of F1292. More recent work by NHTSA shows that a HIC of 1000 may have as much as a 14 percent risk of death and serious head injury. Much medical literature also advocates the reduction in HIC below 1000. The subcommittee’s effort to effect a change from 1000 to 700 was halted, at least for the moment, by the request for data correlating injury mechanism to surface properties. In the past, an effort to develop a portable test for determining the accessibility of an installed surface was ended after repeated failure to advance the standard. One other controversial issue before the subcommittee is whether or not to mandate testing of installed surfaces.

The subcommittee meets twice a year as part of the ASTM F08 Main Committee meeting. Our next meeting is in Tampa, Florida on November 19 and 20, 2015. We welcome new members, especially those willing to get in the trenches and actively participate in the hard work to develop these consensus standards.

Thank you for providing this information to your readers. It clearly explains lots of information. A must read for thoses who,"Just do nor understand"
Luis Rosado, Rubber Mulch Industry

Thank you for this informed explanation. I hope it will be of use to others. I intend to share it with my clients and colleagues.
Cheryl Corson, RLA, CPSI, ASLA