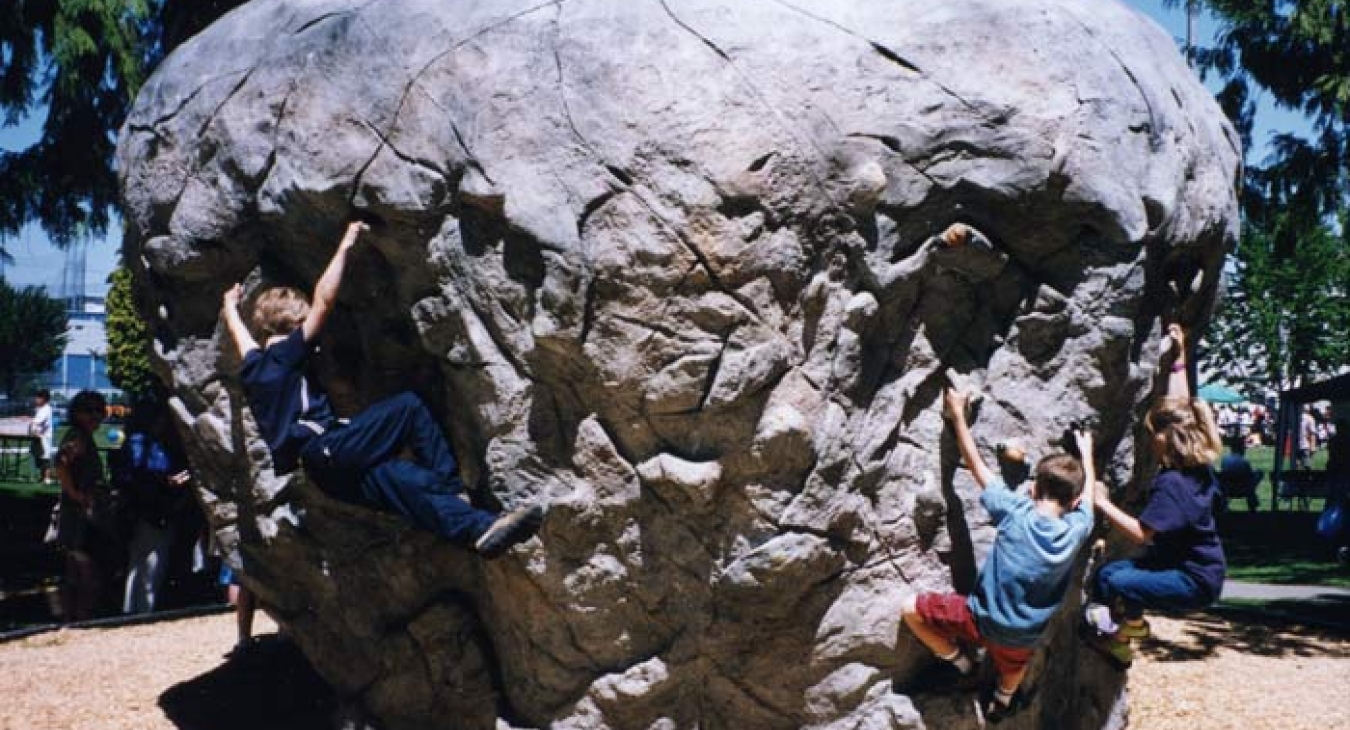 Donald G. Godfrey’s September 2, 2002, article in the Salt Lake Tribune, states that on September 7, 1927, “Philo T. Farnsworth, the father of television, was the first to transmit an all-electronic television signal.”

Mary Bellis, a writer for www.about.com writes that  “in 1952, A.S. Douglas wrote his Ph.D. degree at the University of Cambridge on Human-Computer Interaction. Douglas created the first graphical computer game—a version of Tic-Tac-Toe.” Bellis also writes that “William Higinbotham created the first video game ever in 1958. His game, called ‘Tennis for Two,’ was created and played on a Brookhaven National Laboratory oscilloscope.”

We’ve seen these inventions, once considered a luxury, progress into necessities. The big screen TV with video game hookups has now become an integral part of our family room surroundings. The advent of television and video games has resulted in more and more children playing indoors and the ‘couch potato’ lifestyle of many children in the United States contributes to the obesity epidemic. But one possible solution to the obesity problem has popped up on playgrounds across America. Rock-climbing walls have become a popular pastime for children allowing them to improve their health and enhance their decision-making skills.

According to the Centers for Disease Control, “Health consequences related to overweight can begin in childhood or adolescence; overweight children and adolescents have an increased risk for various chronic diseases in later life.” The detrimental effects obesity has on health, such as cardiovascular disease, risk of diabetes, and hyperlipidemia (high cholesterol and triglycerides), constitute only a portion of the problems children may encounter if they happen to be obese.

The CDC also says, “the psychosocial consequences of overweight are significant. Overweight in children has been linked to social discrimination, a negative self-image in adolescence that often persists into adulthood, parental neglect and behavioral and learning problems.” 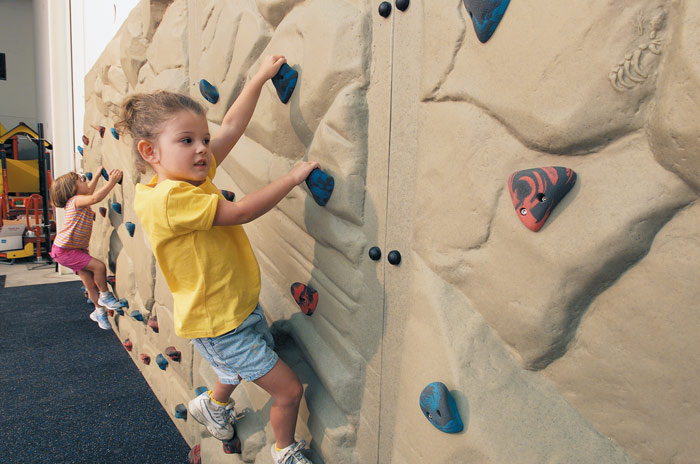 Neal Peirce, a syndicated journalist with the Washington Post Writers Group wrote an article called, “’Phys Ed’, Poised for a Comeback?” This article, posted on the National Academy of Public Administration Web site on March 31, 2002, says that researchers believe children who partake in physical activity improve their mental aptitude. Peirce says the researchers think, “that such physical exercise as running, jumping and aerobic game playing impact the areas of children’s brains that are critical for mental concentration, planning and decision-making” and “children who receive daily physical education seem to outperform others in motor fitness, academic performance and positive attitude toward school.”

Rock-climbing walls will not turn kids into Einstein or end the obesity epidemic in America, but they can contribute to improving the physical fitness of children as well as develop their cognitive abilities.

The sport of rock-climbing has become quite popular in recent years and the benefits of climbing have not gone unnoticed by schools around the nation. Elaine Rivera’s January 31, 2003, article in the Washington Post discusses the construction of rock-climbing walls in Arlington, Va. Rivera’s article states that many children dislike physical education, but the climbing walls have changed the minds of many kids who dread participating in sports. She says, “PE’s popularity has waned as many children raised on the fast-paced entertainment of video games and television find it tedious or even humiliating.”

She quotes Bruce Keith, a physical education teacher in Arlington, Va. He says, “You had the kids who felt intimidated when you had the team-type sports and they would lose. And then you had them doing the same things over and over again, the jumping-jacks, the sit-ups, the stretching routines.”

The boredom of calisthenics and the issue of engaging in team sports may be one of the reasons rock-climbing has become such a popular sport. Rock-climbing allows a child who does not particularly enjoy group games to engage in fitness activity.

The American Academy of Pediatrics addresses the concept of children who do not enjoy team sports participating in physical activities. They state, “Although team and individual sports are beneficial for a variety of reasons, it may be at least as important to encourage lifetime activities such as walking, dancing and bicycling.

These activities can be enjoyed in later life and may be more acceptable to children who lack the motor skills to excel at sports.” They also say that “ideally, children should participate in moderately strenuous activity for at least 30 minutes a day. The effects of exercise are cumulative and multiple sessions of short duration result in most of the health benefits compared with single episodes of longer duration.” Rock-climbing walls provide children with a good workout they can do at their own pace without feeling the pressure from others as they would in a team sport.

IPEMA members, SoftPlay, LLC and RockCraft Designs build rock-climbing systems for playgrounds. SoftPlay designs their Rock Course walls for children between the ages of 4 and 12. Their ad says, “Rock Course is an active play event designed to stimulate a child’s gross motor and decision-making skills.” Curtis Tiano, the Vice President of Sales and Marketing for SoftPlay, LLC says that the walls “are designed for play, but the result is a fitness benefit.”

The SoftPlay system does not require harnesses and “can be mounted directly to a wall, configured into a free-standing climbing area or attached to a new or existing playground.”  RockCraft Designs also builds rock walls, offering a wide assortment of styles to suit any playground environment.  RockCraft’s Web site states that the “playground structures are built from fiberglass reinforced concrete over steel frames. They will be maintenance free for many years.” Ed Fischer, the owner and designer of RockCraft walls, and his brother, Allen, have been involved in rock-climbing for many years.

When the Fischers started their rock wall company, they did not realize how quickly their business would take off. The company became so large that they split it into two parts—Ed owns RockCraft Designs, creating rock-climbing systems for playgrounds and pools and Allen owns EdgeWalls, a company that designs walls for indoor climbing gyms. Ed Fischer has designed climbing walls for 12 years.

He says during the time he and his brother owned The Edge climbing gym in Vancouver, BC, they, “literally introduced thousands of children to climbing.” Now Ed Fischer designs walls for playgrounds, with safety as a top priority. RockCraft says their walls have “unobstructed landings on to an absorbent surface” so if children should fall, they won’t bump into ‘rocks’ on the way down. The walls also have to be designed in such a manner that children and adults will feel challenged. He says, “I want to build something accessible to children but make it challenging for adults.” The walls have to be aesthetically pleasing, too. “I want it to look like a real piece of rock,” Fischer says. But RockCraft doesn’t limit itself to playgrounds.

They also offer poolside rock-climbing walls, known as “PoolWalls.” Fischer says 17 PoolWalls have been installed in North America—16 in Canada and one in the United States. SoftPlay doesn’t specifically offer a poolside wall, but Tiano says their product would be suitable for that.

With rock-climbing walls becoming more and more popular at playgrounds, children who usually avoid sports can stay physically fit and have fun at the same time.