A History of Play Provision in the UK 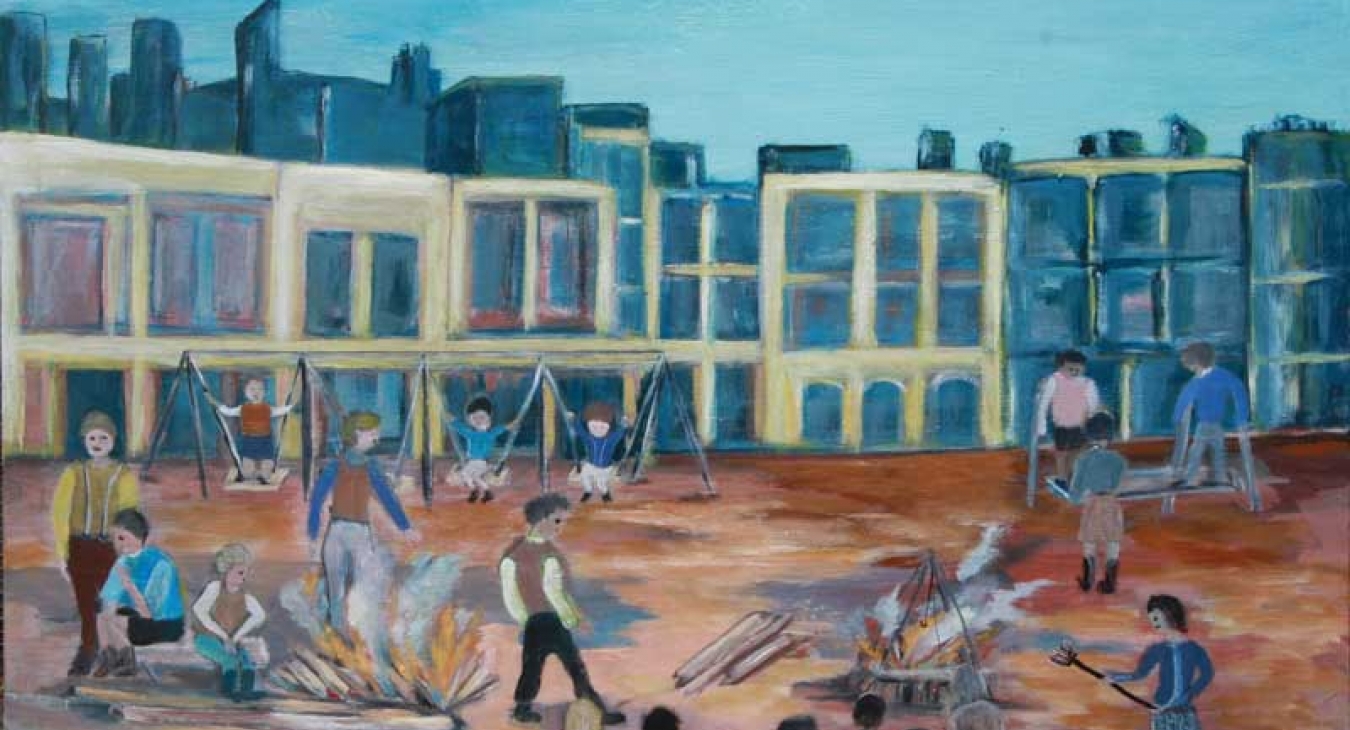 The history of play provision in the UK is short. It wasn't until the early 20th century that it really began. Prior to then, there were few attempts to provide children with any leisure activities apart from those led by the MacMillan sisters and church groups. Charles Wicksteed built unsupervised playgrounds in his factory after watching children playing with some pipes left outside the gates of his factory, whilst the Danish architect Sorenson had a dream of children's playgrounds which came to fruition with his Emdrupt junk playground in 1943. The National Playing Fields Association (NFPA), established under royal charter in 1926, was led by Drummond Abernethy and his team of retired military officers. By 1960, NPFA had established a play leadership department at their playfield house headquarters in London. Until then the NPFA had in the main promoted over 700 recreational playing fields throughout the UK and set national play provision standards for unsupervised playgrounds in close proximity to housing.

Lady Marjorie Allen, whilst on one of her UNICEF excursions, visited the Emdrupt junk playground shortly after the war. She was extremely impressed with what she saw there and returned to the UK leading a campaign to promote such sites in the UK.

In the blitz and after, children were playing on the bombed sites of the cities creating their own playgrounds out of the rubble around them. There was great public concern during the war years as to their safety. Busy roads with heavy traffic and rising juvenile delinquency were concerns after the war.

What an extraordinary adventure

There were hordes of children playing there all having a special time
the leaders all wore long hair and the kids were satisfied
no health and safety limits then just common sense and rhymes.

Marjorie, with the support of Drummond Abernethy and the NPFA, set up 17 trial junk playgrounds in the cities led by playworkers such as Harry Killick at Lollard Street adventure playground London. Following their success, others soon followed. 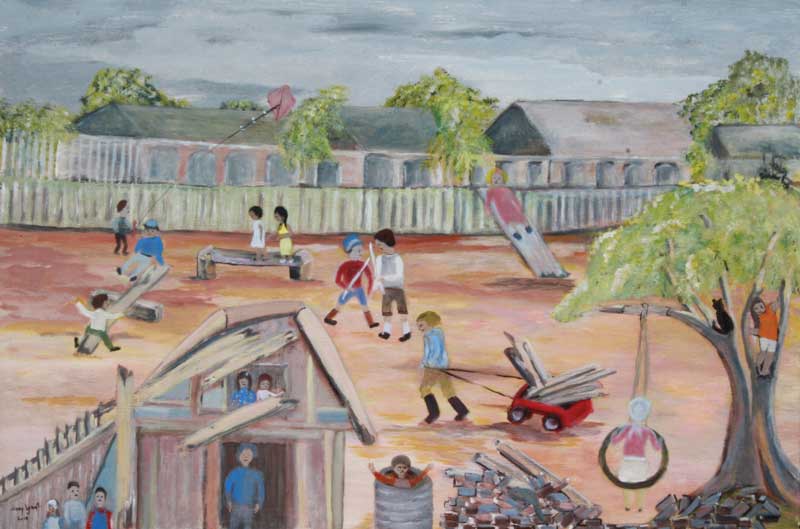 Adventure playgrounds were places where children were able to do many things which they were not able to do elsewhere. They used tools to build dens out of waste materials and duckboards, lit fires, cooked, slid down aerial zip runways, created gardens, etc. These playgrounds were provided with free access, open to children of all ages most evenings, weekends, and during school holidays. These were established and managed by committees such as at Pat Smythe's Notting Hill, London and Gene Pecks' adventure playground at Sparkbrook in Birmingham.
In the early days, most had just one paid full-time playworker whose role was as an enabler, friend, and supervisor. Initially, the leaders were called Wardens but soon gained the name Play Leader then finally, Playworker.

The growth of such schemes expanded throughout the 1960s with the success of Ed Burman's InterAction in Camden, London. Venture schemes by the YMCA at London and Romford and local councils play leadership schemes during school holidays such as 12 at Redditch were also successful. There was a huge growth in the early ’70s of both adventure playgrounds and play schemes nationally managed by local community play association, local councils, development corporations and charities such as Barnardos. 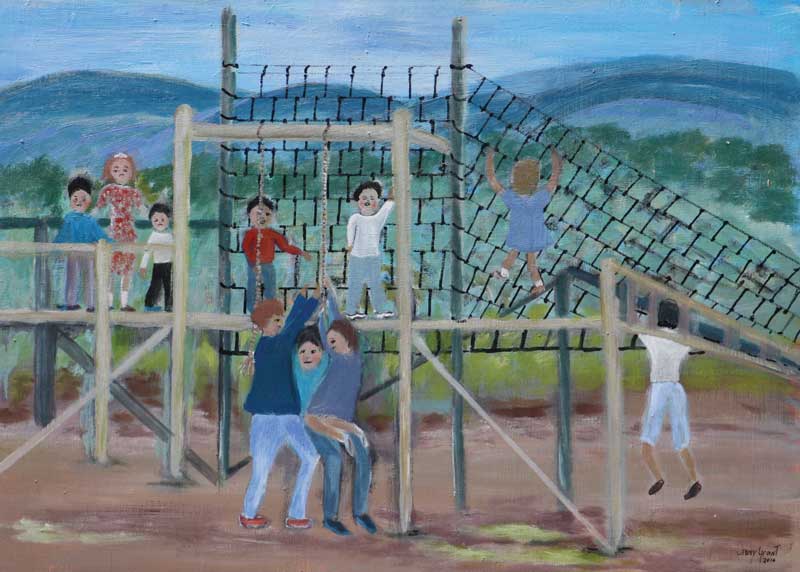 Many new bodies were formed to promote and encourage this provision, such as the Fair Play for children campaign led by the Rev Trevor Huddleston, Bishop of Stepney with the film Children Waiting. The Adventure Playground Workers Association and London Adventure Playground Association, etc. led by Mike Buckley, Jim Jackson, and Pat Smythe were paramount in campaigning for adventure playground acceptance and standards. In the mid-seventies, the new towns, such as Donne Buck's, Bandley Hill adventure playground at Stevenage led this campaign supported by Jack Lambert's Welwyn Garden City with his Penguin Book's Adventure Playgrounds. The NPFA now chose to abandon the military link appointing play workers as regional play officers nationally to promote and support community groups and local councils. A range of in-service training courses was established nationally for the training of play workers at colleges such as Stockport and Goldsmiths in London as well as an Institute of Playwork established with its own full-time diploma course managed by Colin Mayne.

There were now concerns over the safety of children using the unsupervised playgrounds situated close to the housing with tragic stories of fatalities. A campaign was led by the NPFA, Donne Buck, and Rosemary Hamburger and others to provide safety surfaces for these playgrounds involving others like MP Raul Rose and TV celebrity Esther Rantzen. With the political restraints that followed during the Thatcher government years and the austerity measures introduced in recent years, a great many adventure playgrounds were shelved by local councils with restrictions on financial support or else with cuts in opening hours and staffing. All of this had a disastrous effect on play provision right across the board nationally plus many play bodies and organizations which had evolved like Play Board were no longer able to function.

Despite these concerns and the restraints imposed by the new health and safety standards legislation, many adventure playgrounds are still operating successfully. Places like the Wrexham Land Adventure Playground have adopted new schemes. A few which started up in the adventure playground heyday, such as at East Dulwich Dog Kennel Hill, London, and Fernheath Play Center, Bournemouth, are still functioning as originally designed.

Today, we can build new adventure playgrounds to share the benefits with the next generation.

Hello, Tony! Would you like to contribute an article on this subject? We would love to include your input! Please email me at [email protected]com

Very surprised and somewhat disappointed in Ray's account of the History of Adventure Playgrounds in the U.K. There were a good number of "pioneers" of the concept of such provision and Ray appears to dismiss their profound influence by naming just a very small few of those involved, some of whom for a relatively short period of time. Yet many other such workers who are omitted from his account were exceedingly committed to the development of Adventure Playgrounds and contributed enormously over many, many years,to their importance in providing "free" and unadulterated play opportunities in some of the most socially desperate areas of the UK. The Adventure Playground Workers Association was established to protect the original thinking and principles of A Ps,in addition to creating an understanding of the rights of Play Workers in relation to pay and working conditions as well as training and education. APWA for instance produced one of the earliest references to such way back in the 1960's/70's.With regard to training and education, the first full-time courses were established at Thurrock and Goldsmiths respectively. The first in-service courses were set up in London by LAPA and in Stockport by the North West Play Association (NWPA) Pre and Post Graduate Courses were established in Leeds, Newcastle, North and South Wales, Bristol etc. etc. I was personally heavily committed to the creation of appropriate traing and education in relation to our profession. I am fully aware of Ray's very valuable contribution to our profession, but as stated earlier, I am far from being happy with his account of developmental events, where,when and how they occurred and who was involved. Interested parties should read some of the work of Fraser Brown, an experienced Adventure Playground worker and the first Professor in Playwork in the U.K. Furthermore, there are other contributions relating to the history of Adventure Playgrounds available elsewhere which students and other interested parties in our work should seek out. Interestingly there appears to be very little if any references to Adventure Playgrounds and their ability to accommodate children with particular needs.In regard,there was an organisation set up to address the matter, this was known as the "Handicapped Adventure Playground Association " Intergrated APs.were established in Chester and Newcastle during the 1970's.