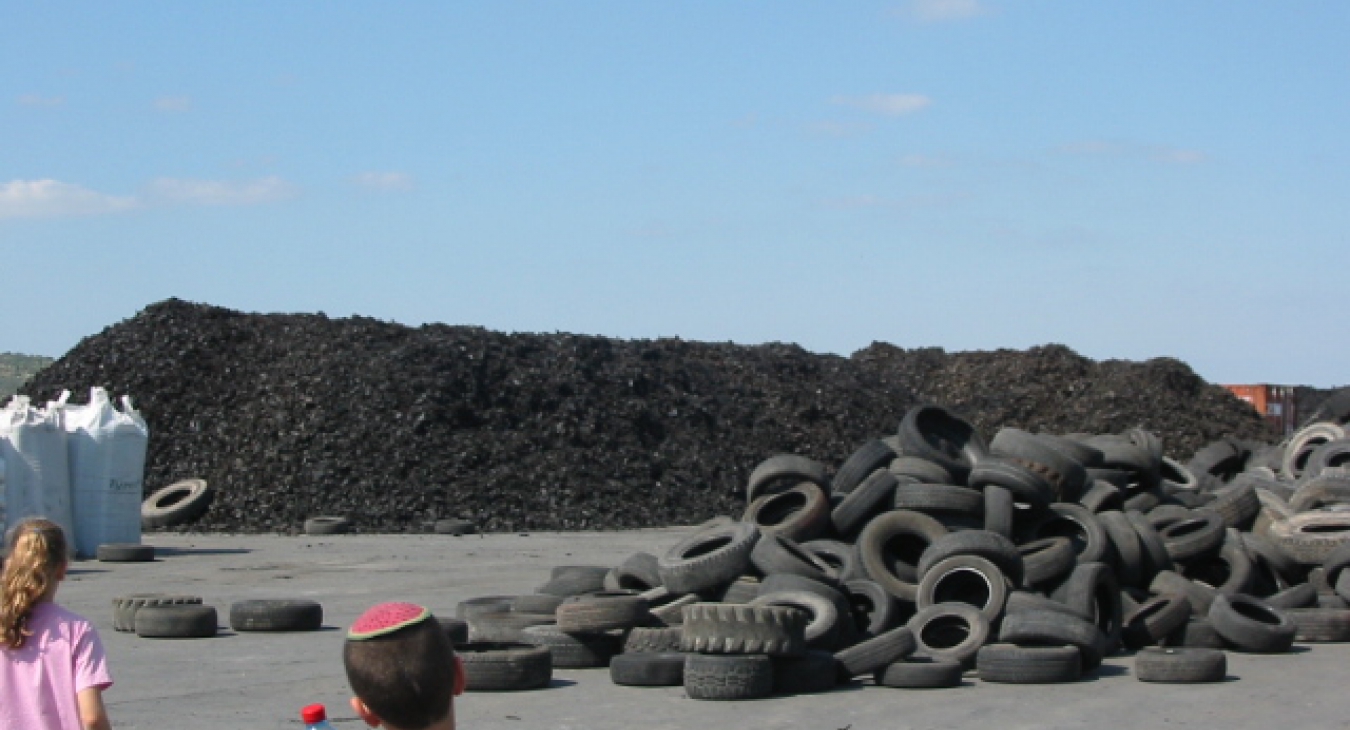 As I travel across the country I’m seeing more and more playground surfaces comprised of rubber tire mulch. Chances are you’ve seen the surface at schools, churches, and public parks.

At first blush, the popularity of rubber tire mulch makes a lot of sense. Less degradation than traditional mulch, more and brighter color options, and great fall safety ratings. Even The Consumer Product Safety Commission’s Public Playground Safety Handbook offers a stamp of approval for rubber tire mulch as a play surface. At the same time, my experience in the safety play surface industry tells a much different story.

In short, my customers’ dealings with the product has shown rubber tire mulch is not optimal as a safe play surface for children. Nobody is saying tires, whole or recycled, are killing people per se. However, there are some legitimate concerns that are worth reviewing when it comes to rubber tire mulch as a play surface.

Looks can be deceiving. As rubber tire mulch is transformed from worn out filthy shreds of disposed scrap to candy-colored nuggets the approximate size of wood mulch, the patina of a safe product begins to take shape. As the tire mulch is installed, and kids joyfully play on it, a narrative of recyclable success is easy to glean. But, what’s underneath the shine of newly installed rubber tire mulch? What are the possible health effects of tire rubber? Specifically, how much do toxicity, evidence of steel wire, and long-term cost play into the calculation of installing rubber tire mulch on a playground at a church, school, or public park?

Rubber tire mulch is a post-consumer product. The intent in the production of tires is to gain traction on a roadway, not serve as a pillow for kids as they play. Tires are of such concern to states like Georgia, that their localized version of the EPA has a whopping 17 different applications and forms to fill out for the transport, reuse, and disposal of tires.

A tire is a tire, and after an initial life of use on the road, it is no longer virgin rubber. The tire compounder is not designing a product for your child to play on, and thus things like red list chemicals, and fillers that are respiratory irritants, exist. If a child encounters any of this it could be a liability for the institution housing the playground.

Contamination from roadways is also a serious concern. What could tires encounter on roads? Petrochemicals, lead contaminants from roadway paint, heavy metals, and oils to name a few. With the known risk of exposure to toxic chemicals that tires regularly encounter there’s no guarantee rubber tire mulch is safe for kids to play atop of.

Many rubber tire mulch products advertise being 99.9% wire-free leaving the chance for pieces of exposed steel wire to be in every ton delivered.

Initial cost for rubber tire mulch is between $5 and $7 per cubic foot. A 6,000 sq ft playground would require 5,000 cubic feet of surfacing. Taking the lower number into account, a school, church, or public park could spend tens of thousands of dollars to purchase and install the product.

Long-term liability cost is difficult to calculate without the benefit of hindsight, but factor in removal fees after paint degrades, and costs can add up fast.

A group of parents asked a Duluth, MN school district to spend $380,000 to remove rubber tire mulch from 10 playgrounds. The school board voted unanimously in approval of the effort. The additional $38,000 per playground removal fee does not include the replacement surface cost. A single playground that should have a surface with a 25-year warrantied product on it for say $30,000, will now end up costing many multiples more. Factor in potential legal and medical costs for any issues kids might encounter from playing on rubber tire mulch, and you have to really think long and hard about the value of the product as a play surface both for now, and in the future.

Rubber tire mulch continues to be a popular surface choice despite the troubling evidence found in the publicly available information on the topic. For school administrators, PTO and PTA officers, business managers, church leaders, and county council members it is time to take note.

Due diligence of any play surface pre-purchase is important, and for a post-consumer like rubber tire mulch, it’s doubly so. By doing so you will be avoiding costly replacement efforts and potential liabilities tied to rubber tire mulch in the months and years to come.

The EPA does not consider

The EPA does not consider scrap tires as a hazardous waste. However, if not properly disposed of or recycled they may create an environmental concern. Turning some of those tires into usable products such as recycled rubber pavers, playground surfacing tiles or impact absorbing mats helps keep fewer tires from ending up in landfills and tire piles. Using recycled rubber landscaping products is an echo-conscious option since it means less tires end up in piles, smaller impact to landfills and minimized risk of tire pile fires,

I didn’t even need to do

I didn’t even need to do research, even though I am, I am in Arizona and I just dropped my son off at daycare where they swapped out wood chips for tire shreds and it reeks of chemicals! I am so pissed, it’s not even our hot season yet!

If you care for your children

If you care for your children or next generation, I would not recommend rubber mulch.
FYI
https://s3.wp.wsu.edu/uploads/sites/403/2015/03/rubber-mulch.pdf
http://cru.cahe.wsu.edu/CEPublications/FS163E/FS163E.pdf
https://web.extension.illinois.edu/hkmw/eb285/entry_10069/

I am looking for a place to

I am looking for a place to rid a lot of tires and I keep thinking this is the best place I have many truck loads of them. I started seeing the play grounds and love the soft walks on them its like a god send so I stared looking and found this site wow I had not thought bout some of the concerns but I can give an input on some as I and many people I know that change tires never heard of any one geting anything from handling tires and taking them off a car or truck if they wear contaminated theas are the ones that shuld be geting sick 803 412 1154 thanks

Check out these other two

Check out these other two articles:

I was reading this article

I was reading this article thinking it sounded like it was coming from a biased point. I come to the end to find the person writing it has a financial stake in discrediting recycled rubber mulch. At this point I am not solidly for or against this product. I've been led to believe that studies have shown it safe and have seen such studies. But, I understand the concern and as a playground provider I try to give my customers all the information they need when choosing a surface, which is why I read these articles. This article provided nothing but biased opinion. Please share them, if you have studies showing negative effects.

Nice article but we are

Nice article but we are missing one safety concern that while related to children is related to the financial safety of the owners. Is the loose surface accessible? Since there is no field test with ASTM or any other standard at this moment we are all out at risk when an ADA Advocate fills a complaint with the Department of Justice. Loose-fill surface systems has been a target from the very beginning mainly because of bad installation and a commitment to timely and consistent maintenance. EWF has had a target on its back for years and several agencies have been banned from using it as their surface for those reasons. Is loose rubber next target? I think so. Buyer beware. While it is great at absorbing impact at higher than usual fall heights it has its blemishes pre or post consumer, contaminants included. Owner education is important and you did a good job on the toxicity issues but forgot the sleeping giant - the ADA.

I was hoping for more data

I was hoping for more data out of this article. The article this links to by Rolf Huber is very thorough however, covering all the bases included here and more. Noteworthy, is that the most comprehensive study yet performed on toxicological harm of recycled tire mulch (State of California 2007, Office of Environmental Health Hazard Assessment) found no evidence for it.
Though not endorsing recycled rubber tire mulch per se, I do think that we professionals have a responsibility not to fan the flames of concern without reliable supporting evidence.
I appreciate this author raising the question, but of the articles I’ve read on this matter, Rolf Huber assessed it best:
https://www.playgroundprofessionals.com/surfaces/rubber/health-effects-t...

I have believed ,from its

I have believed ,from its introduction, that disposing of our toxic waste on children's play areas was a really bad and dangers practice. My fear is that it will take a generation of exposing children to this toxic waste before we realize the damage it has done.